The MiG-29 fighter was made in former Soviet Union in the first half of 1970s as a counter balance to the new U.S. F-16 and F/A-18. MiG was primarily created to won air superiority over the enemy; therefore its aerodynamic conception was subordinated: the fuselage was created to make pressure and achieve greater manoeuvrability. The couple of RD-33 engines with maximum thrust and afterburner 81.40kN has been chosen as a powerplant of the aircraft. The first prototype took off on October 6, 1977. The fighter was step by step modernized and from being only air fighter, it has become multi-role aircraft capable of precise attacks on the ground targets. The latest types have been still produced. 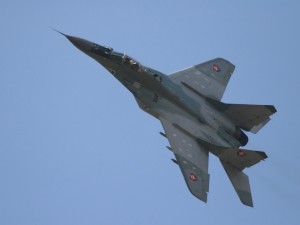 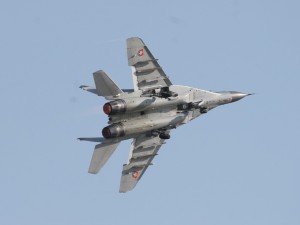 One of the MiG-29 users was also Czechoslovakia with 20 of these air fighters by 1989. However during splitting of the federation, the half of the aircraft remained in the Czech Republic. These planes were later exchanged with Poland for W-3A Sokol helicopters. The second half of MiGs-29 stayed in Slovakia and still serves as the backbone of the Slovakian Air Force. The number of Slovakian MiG-29s was increased by 14 more aircrafts from Russia during 1993-1996. Twelve of these planes were modernized during 2005 and 2006 to standard single-seat version called MiG-29AS and two-seat version MiG-29UBS. As for the example, the aircrafts were newly equipped with Western displays, radios or navigation. Slovakian MiGs-29AS are also part of NATO’s Integrated Air and Missile Defence System NATINAMDS. All Slovakian MiGs-29 are located at the Sliač Air Force Base.

The site is prepared in the cooperation with editors of  Flying + Cosmonautics magazine of Aeromedia publisher house.  The magazine brings current information about military and civilian flying environment.