The castle guard will perform ballet on motorcycles

For the ninth time, members of the Castle Guard will attend the NATO Days in Ostrava & the Czech Air Force Days. Even this year, spectators can look forward to an attractive performance, during which riders from this special unit will present their skills on BMW R-1200 RT motorcycles.

In addition to specially modified BMW R-Series motorcycles, which will conclude the show with their exhibition, the Škoda Superb and Land Rover Discovery will also be involved in the performance. 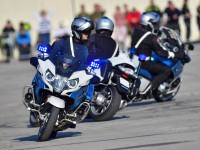 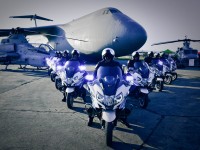 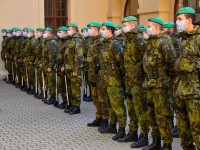 "The performance of the Castle Guard contributes to a diversification of our event every year, mainly thanks to the complex choreography during the demonstration of service motorcycles," emphasizes Zbyněk Pavlačík, Chairman of Jagello 2000.

Although the Prague Castle complex was closed to the public during the state of emergency, the Castle Guard had to continue to guard both the Castle and the chateau in Lány. The security of the President's residences is one of the main tasks of the Castle Guard, thus it had to adapt its regime and take preventive measures against possible spreading of the COVID-19. A key part of the soldiers of the Castle Guard, whose task is primarily guarding and defending the presidential residence, performed their duties while using face masks. The soldiers were equipped with masks from the castle guard's tailor's, where the tailors produced several dozen pieces a day.

In the past few days, two soldiers were tested positive, so the prepared system of unit rotation was tested in practice. Soldiers who came into contact with the infected were immediately tested and quarantined. No other positive findings occurred, the infection did not spread further and the security system was not disturbed in any way.

The Castle Guard is an independent branch of the Armed Forces, although it is financially and logistically secured by the Czech Army. There are almost a thousand soldiers in this brigade-sized unit, who, in addition to the general requirements for admission to the armed forces, must also meet specific ones, such as a certain height or the absence of a beard or tattoo.