There are only a few days left until the arrival of the participants of this year's NATO Days in Ostrava & Czech Air Force Days but you can already soak up the atmosphere of the weekend show with a trailer from PlanesTV. If you do not get to the event in person, you can watch the program again on the Czech TV and on our social networks.

Take a look at a short trailer of the most interesting things that will be waiting for you on 18th and 19th September at Leoš Janáček Ostrava Airport.

The British company PlanesTV has been the official producer of the NATO Days videos for the ninth year in a row, and this year will be no different. After a one-year break, when it will prepare edits depicting the most attractive moments of the entire program.

The complete program will also be broadcasted via an online stream on the event's social networks and on the iDNES.cz news portal, which has gained high popularity. Already on Friday we will offer broadcasts of arrivals and the most interesting rehearsals.

The afternoon part of the program will also be broadcast live by the Czech TV on the CT24 channel, where it will add interesting interviews and other thematic inputs to the events at the airport. 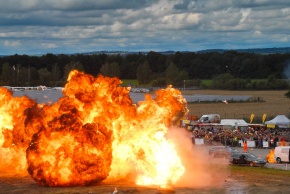