With the participation of 19 partner countries and under the partnership of NATO, the 22nd NATO Days in Ostrava & 13th Czech Air Force Days, largest security show in Europe, started with 85 000 people visiting the first day on Saturday. In the cool late summer weather visitors had the opportunity to see modern equipment and displays by various security and firefighting and rescue forces. In total, nearly a hundred aircraft and a thousand different types of other equipment were on display.

After the opening paratroopers' jump a rich kaleidoscope of dynamic displays began, followed by static displays of equipment fully occupied by eager spectators. For the first time, a Mi-24P combat helicopter of the Hungarian Air Force was presented in a dynamic display, followed by a demonstration called "Capture of a person of interest by an ambush" performed by the Army of the Czech Republic. Displays of this type take place on the ground and in the air and are very popular throughout the audience. The premiere display of the German Army's new NH-90 TTH twin-engine multi-purpose helicopter was also interesting.

A display of the Ostrava Municipal Police intervention unit against an enraged crowd with the help of police officers on horseback and a canine specialists made it clear that disrespecting the rules does not pay off. While the noise on the ground was dying down, the roar of the Austrian Air Force's twin-engine Typhoon could be heard from the sky. Its pilot, known as Falco, masterfully showed what he can do with this machine. Afterwards, a joint action display of the Moravian-Silesian Regional Police Directorate, the Polish Komenda Wojewódzka Policji in Katowice and the special female anti-terrorist unit of the Jordanian army QRFT, which is attending NATO Days in Ostrava for the third time, started on the ground. The rescue of the hostages from the hands of terrorists was a display of the interplay of professionals who really get into action when things are really bad. 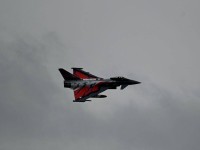 The display of rescue of an injured person by the Moravian-Silesian Region Health Rescue Service using the W-3A Sokol helicopter made it clear that even in the most challenging conditions we can rely on the help that comes "from above". After the opening ceremony and the firing of the T-72M4CZ tank, the Polish special unit JW AGAT performed a tactical HALO (High Altitude, Low Opening) jump. A powerful opening flypast by the Czech and German air forces foreshadowed the afternoon part of the dynamic displays.

From ground performances of the Customs Administration of the Czech Republic, Poland and Slovakia, the Prison Service, the Foreign Police and other action displays of the Army of the Czech Republic to the popular performance of the motorcycle unit of the Castle Guard. With excitement and eyes to the sky, the visitors of the event awaited the premiere flypast of the F-35 Lightning II of the Royal Netherlands Air Force which after the first relaxed flypast and the necessary greeting of the spectators during the second flypast went into a fast flight and a steep climb.

The JAS-39 Gripen E, SAAB's latest Gripen model, was also presented for the first time in the Czech sky.  The Czech production showed examples of the top jet trainer  L-39NG from Aero Vodochody or the L 410 NG from Aircraft Industries, the successor to the popular Turbolet. Breathless was the performance of the world vice-champion in aerobatic flying, Martin Šonka, on the Zlín Z-142C AF trainer aircraft from LOM Praha. As an imaginary icing on the top, we can consider the breath-taking premiere performance of the aerobatic group Patrouille Suisse on F-5E Tiger II machines. 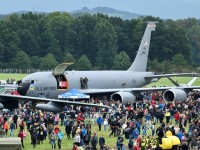 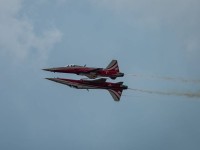 "We are very pleased that we could welcome visitors to our event again without covid restrictions", said Zbyněk Pavlačík, chairman of the organizing organization Jagello 2000, and added: "The constant interest of the audience is the best certificate not only for us, but for all participants and partners of the event."

Even during the static displays, visitors could see top military, police, rescue, and firefighting equipment which was constantly besieged by enthusiastic admirers. The dominant display was, quite understandably, the "big planes" - from the P-3C Orion reconnaissance aircraft of the German Navy to the premiere of Embraer C-390 of the Brazilian Air Force and many of the largest machines of the US Air Force. The US Air Force has showed the C-5M Super Galaxy, the C-17 Globemaster, the KC 135 "flying gas station" and the iconic Boeing B-52 Stratofortress. Seeing this avenue full of massive wings was a tremendous experience and not just for aviation fans. At the end of it, there was an unmanned MQ-9 Reaper which is one of the most advanced machines in its category.