Across the Atlantic to Ostrava. The American giant to perform 30-hour flight

The dynamic aerial display of US Air Force and Czech Air Force aircraft over the venue of NATO Days in Ostrava & Czech Air Force Days will demonstrate American determination and capability to fully support its valued NATO ally - the Czech Republic. One KC-135 Stratotanker, flown from Nebraska, USA, four F-16 Fighting Falcons flown from European bases, will accompany the B-52 Stratofortress which will fly a non-stop round-trip directly from Barksdale Air Force Base in Louisiana, USA.

Spectators of the show can expect a unique air show of Czech and US aircraft joining in the sky over NATO Days in Ostrava.  The Allied formation will then continue to Prague and Pilsen. Subsequently, the B-52 will return to its home base. Thus, the crew will have to endure an almost 30-hour long journey without landing, during which they will have to conduct an air-to-air refuelling from the KC-135, belonging to one of the Czech Republic’s US State National Guard partners - Nebraska.

“The B-52 is an icon itself and also a kind of a symbol of the NATO Days, so we can hardly imagine the event without the presence of this extraordinary aircraft. We are more than happy that the US Air Force decided to make the fly over the Mošnov Airport and cities of Prague and Pilsen so that more people can watch how the sky is filled with the wings of the American giants,” appreciates Zbyněk Pavlačík, the chairman of Jagello 2000.

The people in the Czech Republic will be able to see the formation of the planes above Prague at approximately 1:00 pm in the direction from Kbely Airport via the main railway station and further southeast. 10 minutes later, the pilots will "greet" the monument in Pilsen over the monument "Thank you, America!". Then the group splits again and heads back to their home bases. 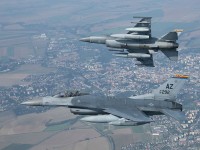 "Close cooperation with the United States began in 1993, ie before our accession to NATO. It is gradually expanding, not only in the area of training, but also in the field of the equipment. The last such project is the purchase of 12 Viper and Venom helicopters," comments Defense Minister Lubomír Metnar on the American participation at the event.

"We have a great long-term cooperation with the US military," appreciates general Aleš Opata, Chief of the General Staff of the Army of the Czech Republic. "We work together in foreign operations, organize exercises and cooperate on the education system. We have years of working with the Texas and Nebraska National Guard. Regular joint exercises include the ongoing Ample Strike." 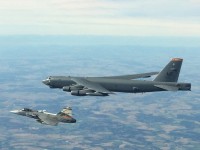 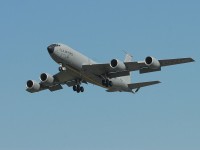 "Dynamic aerial demonstration of American and Czech Air Force aircraft over airport in Mošnov, which traditionally hosts NATO Days in Ostrava, is symbolic to express American support to its reliable ally," explained Griffin Rozell, spokesman for the US Embassy in Prague.

Two years ago, the United States and the Czech Republic celebrated the 100 years of American-Czech relations and for this occasion, in 2018, the USA was presenting themselves as the Special Partner Nation. The history of the USA and its Armed Forces participation at the event goes way back to 2006, when they presented two F-15C Eagle fighter aircraft and two multirole F15E Strike Eagle, thus making the USA one of the first foreign participants at NATO Days.