For the first time ever, Eurofighter Typhoon with four different national markings will fly above this year’s NATO Days in Ostrava & Czech Air Force Days. The United Kingdom has confirmed the participation of its Typhoon Display Team, which will join the dynamic displays of Spain, Italy and Austria.

Visitors of NATO Days had already the opportunity to become familiar with the British Typhoon in 2007, when this twin-engine multi-role fighter landed in Central Europe for the first time. Two years later, the British RAF Typhoon Display Team performed its premiere in Mošnov, which was one of the highlights of the event. Nevertheless, this year is even more special, for the visitors will have an opportunity not only to experience this display for the second time, but also compare it with performances of the other three European teams. This is very unique not only within this air show, but worldwide. 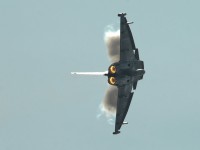 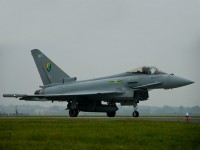 “It is very rare to witness four European Typhoon Demo Teams at one air show. This will happen for the very first time,” said Jan Čadil, editor in chief of Letectví+kosmonautika magazine. “On the other hand, visitors cannot expect to see the same display four times, quite opposite. While the British pilot flies very dramatically and performs barrel roll with afterburning, the Spanish pilot focuses on manoeuvres in very low speed. We may even say that there’s nothing in common in these displays except using the same aircraft.“

This year’s RAF Typhoon Display Team’s pilot is Flt Lt Mark “Schlongy” Long, who joined the Typhoon Force four years ago. Moreover, visitors can see the British Eurofighter from the very close distance as well. The RAF is sending three fighter jets to Ostrava in total – one to perform the display, the spare one and one for the static display.

Despite the fact that the Eurofighters were originally designed for the air battles, the British FGR4 variant can be deployed for the whole spectre of operations, including air policing, support of peace missions, or air to ground attacks. After removing Tornado F3s from the active service, the Eurofighters are the only combat aircraft in the RAF for the UK’s air defence. There are 137 Typhoons with the characteristic canard-delta wing in the Royal Air Force’s equipment.

Eurofighter is the third kind of aircraft sent to Ostrava’s air show by the United Kingdom. The static displays will be filled in by twin-engine combat fighter Panavia Tornado GR4. Further, the Royal Navy will present its training aircraft Hawk for the very first time and moreover, the two British parachute teams Tigers and Falcons will show off above Mošnov airport. 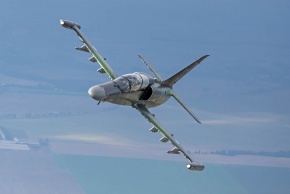