Visitors to the NATO Days in Ostrava & the Czech Air Force Days can once again look forward to two impressive jumps of elite soldiers. About 40 paratroopers from the Polish special unit AGAT and the Czech 43rd Airborne Regiment will perform two separate, typologically different, jumps.

NATO Days will host two typologically different jumps special. While in previous years members of the Polish special unit AGAT and the elite Czech 43rd Airborne Regiment were introduced to the audience during a mass joint combat landing of CASA C-295M aircraft, they decided to present different airdrops for this year. 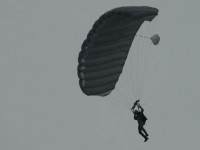 "In the previous two years, both of these units jumped together, creating an impressive spectacle in the sky, but for this year they decided to show something new," comments Zbyněk Pavlačík, Chairman of Jagello 2000 and adds: “Czech paratroopers will perform a parachute jump from a small height, which is mainly characterized by speed, while members of the Polish AGAT will use wing-type parachutes, which will allow them to achieve an accurate impact in combination with high altitude.

The 43rd Airborne Battalion of the Army of the Czech Republic is the only unit of this type in our army. The airborne battalion is characterized primarily by its high mobility, thanks to which it can be used in a wide range of operational deployments. The "Forty-Three" is thus one of the backbone units of the Czech expeditionary forces and has participated in KFOR operations in Kosovo and Resolute Support in Afghanistan. At the same time, it is undergoing a significant transformation, because from October, this battalion will become a regiment with more than a thousand soldiers and new armaments, incl. drones.

The Jednotska Wojskowa AGAT is one of the special light units under the Special Forces Command of the Armed Forces of the Republic of Poland, which also includes JW Komandosów or the well-known GROM. Though, this unit was created in 2011, its members have presented themselves five times at NATO Days already. The AGAT special unit, which is located in nearby Gliwice, focuses primarily on diversion operations, which are usually done behind enemy’s lines. For these operations, it is equipped with state-of-the-art equipment, in its arsenal we can find, for example, HK 416 assault rifles, Sako TRG sniper rifles, which are also used by intervention units of the Czech Police or Oshkosh M-ATV vehicles.