Patrouille Suisse heading for its Czech debut, together with Swiss F-18 Hornet

For the world-famous Patrouille Suisse, this would be not the first appearance in the Czech Republic, however it appeared in Slovakia's SIAD in 2004, so it will be its first presence in whole former Czechoslovakia in 12 years. The planned joint participation of two display teams at the Mosnov airport will be the most important international  presentation of the Swiss Air Force this year.

The announced participation will be the Swiss Air Force’s largest presentation abroad at a single event this year. No other international show will feature both Patrouille Suisse and another Swiss AF demo team! 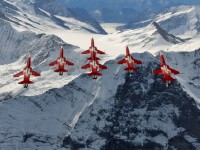 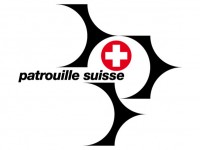 “The 2016 calendar of the Patrouille Suisse and the Hornet Solo has been posted on the Swiss Air Force website already some time ago, but we had to wait till now for the official confirmation letter from the Swiss Air Force Command,” explains Zbyněk Pavlačík, head of Jagello 2000. "We have tried to secure the Patrouille Suisse for several years, because the Swiss Air Force plans its foreign presentations, which usually total about five each year, very carefully. So we are glad that we will see this group now. It was founded in 1964 and it has never performed in  the Czech Republic so far."

Each of the Swiss teams presents different capabilities. While the Patrouille Suisse performs precision flying in group formations, the Hornet shows off the limits of its sheer power.

All Patrouille Suisse aircraft feature smart red and white livery in national colours. Thanks to this high visibility paint, the team’s aircraft are also used for training and for towing training targets. The Pilatus PC-6 aircraft in the team colours will also arrive to Ostrava as the support aircraft, transporting the commander, announcer and ground crew. 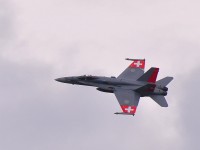 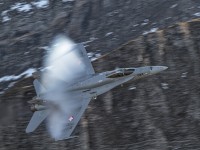 "We are also glad that we can present the jet aerobatic group after a two-year break. We saw the Patrouille Suisse performance at Air Payerne 2014 and we are sure our visitors will like it," adds Pavlačík.

Thanks to the Belgian and Swiss announcements, we now have four very attractive dynamic displays confirmed by early February. “To have such participation confirmed so early into the year is unprecedented in the history of NATO Days in Ostrava & Czech Air Force Days. We believe this is thanks to the high reputation of our event,” notes Pavlačík.

Although both Swiss displays will be premieres in the Czech skies, regular NATO Days in Ostrava & Czech Air Force Days fans could make comparisons with same aircraft type displays from previous years. In 2014, the F-18 display by the Finnish Air Force was one of the most appreciated demonstrations. In 2013, the Turkish Stars have flown their F-5 Freedom Fighter jets also in a six-ship configuration.

The Swiss F-18 Hornet will be already the third F-18 to fly  in  the Mosnov skies. Except the mentioned Finnish display in 2014, this powerful and agile fighter debuted in the Spanish Air Force colours in 2007.

So far, the only Swiss Air Force presentation at NATO Days in Ostrava & Czech Air Force Days was the Super Puma helicopter display team in 2012.