Spanish Eurofighter is coming back to Mosnov

The Spanish Air Force is another confirmed participant of this year's NATO Days in Ostrava & Czech Air Force Days. After two years, it will bring the Eurofighter Typhoon fighter jet for a dynamic display to Mosnov Airport.

Visitors could have seen the Spanish Eurofighter at NATO Days for both the first and last time so far in 2016 when it took part in a historical meeting of all five European operators of these aircraft - beside Spain, the United Kingdom, Austria, Germany and Italy also participated. In addition, three of them attended the outstanding final joint flypast. 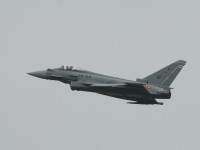 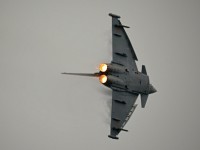 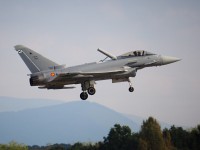 “Dynamic displays of the Eurofighter fighter jets are among the most attractive ones and we are delighted that Spain has decided to participate in our show with this aircraft once again. Although this information had already appeared on some websites, we traditionally announce the new participant after the official confirmation from the Spanish Air Force,” emphasizes Zbyněk Pavlačík, the chairman of Jagello 2000 and adds: “Some mentions already appeared on various websites and social networks that this is not the only Eurofighter coming to NATO Days, but once again, we do not consider it the official confirmation.“

Eurofighter Typhoon is a multi-role two-engine supersonic aircraft with a characteristic delta wing, which was developed primarily for air-to-air combat, however, with additional upgrade it can also be used for attacks against ground targets. The Spanish Air Force contemporarily operates 62 out of 73 ordered aircraft, three of them lost due to crashes.

Eurofighter fighter jets could have been seen at NATO Days for the last time last year, when they took part in dynamic displays by both the Italian and Austrian Air Forces, and one aircraft was also presented on a static display by the Austrian Air Force.