The NATO Days in Ostrava & Czech Air Force Days are a traditional venue for premier performances, and this year will be no different. The C-390 Millenium transport aircraft of the Brazilian company Embraer is preparing for its first public presentation in Central Europe.

The Czech Republic plans to modernize its fleet of transport aircraft, and the C-390 Millennium may be one of the candidates to replace some older machines in the Czech inventory. The Czech company AERO Vodochody also participates in its development and production. In June, the aircraft was presented at Pardubice Airport to the Army of the Czech Republic as part of a wider presentation in Europe, but the general public will be able to see it live for the first time at NATO Days. 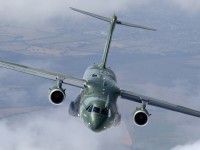 "This year we will have a participant from a completely new continent - South America - in the form of a modern Brazilian C-390 Millennium transport aircraft which will be presented here to the Czech public for the very first time," emphasizes Zbyněk Pavlačík, chairman of Jagello 2000.

The C-390 Millennium is a medium military transport aircraft that can carry up to 26 tons of cargo or 80 troops and can operate from unpaved runways. Currently, only the Brazilian Air Force has the machine in service, however contracts for new aircraft have already been signed by Hungary, Portugal, and the Netherlands. The aircraft began to be included in the Brazilian armament from 2019. Hungary and Portugal will receive their first machines in 2023, Netherland then three years later.