The British Tigers will again drop to Mosnov

After three years, the paratrooper group Tigers of the British Army returns to NATO Days in Ostrava & Czech Air Force Days. Its attractive display will complement the already confirmed participation of the British Typhoon Display Team.

Parachute jumps are traditionally performed during the opening ceremony of NATO Days, when Czech soldiers with waving flags descend to the venue. But the Tigers are a regular aerobatic team and its members are equipped with smoke grenades to track their flight paths and create impressive visual effects. 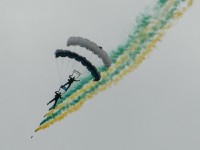 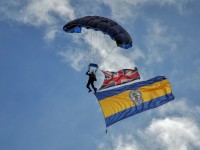 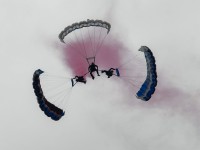 “The Tigers will return after three years and they will definitely want to follow up on their impressive 2016 performance. However, keep in mind that to a greater extent than other flight demonstrations, the performance of the skydivers is weather dependent, especially cloud cover and the wind, so hopefully it will be favourable to us, ”says Zbyněk Pavlačík, President of Jagello 2000. “We are glad that the British Armed Forces are broadening their presence in Ostrava. At the same time, after a long time, this is the first confirmed parachute team participation.”

The Tigers Parachute Display Team is part of the Royal Army and focuses on contact parachute formations or wingsuit. The Tigers will not have their own aircraft and so their display is only possible thanks to the contribution of the Flight Training Centre Pardubice, which belongs to the main strategic partner of the event LOM PRAHA and whose Mi-17 helicopter will take the British skydivers up to the jump location.