The elite display pilot of the Czech Army Ivo Kardoš and the acrobatic king and winner of the prestigious Red Bull Air Race Martin Šonka will repeat their unique joint performance. Visitors to NATO Days in Ostrava & Czech Air Force Days will have a unique opportunity to see the breathtaking flight figures of the JAS-39 Gripen and the Extra-300 aerobatic special.

JAS-39 Gripen display pilot Ivo Kardoš and Martin Šonka, the winner of the prestigious Red Bull Air Race series, with the Extra 300 aircraft, are preparing a dynamic display in which the jet engine and propeller aircraft fly together in very close formation.

“Of course, the safety of the demonstration will always be a priority for us. If everything goes as planned, it will certainly be a unique performance,” said pilot Ivo Kardoš. The assembly itself had to be approved by the Flight Director of NATO Days in Ostrava and Czech Air Force Days. 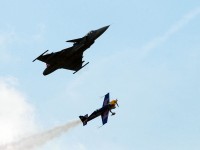 During the premiere of Šonka, who is himself a former military pilot of the Gripen, he also performed his traditional upside-down flight. Kardoš, who in the Gripen during the joint performance practically constantly at the minimum speed of the machine, again publicly the first in the world made a roll around Šonka aircraft.

In preparations, the pilots had to plan and analyze in detail all the factors and situations that could occur in such a joint demonstration of the supersonic combat aircraft and the aerobatic special.

Captain Ivo Kardoš has been a Gripen demonstration pilot for the third year in a row and has won numerous prestigious awards at European air shows. Last year, his solo performance was voted as the best flight demonstration at NATO Days visitors in Ostrava. Like Kardoš, Šonka has a lot of experience with the JAS-39 Gripen. Unlike his former colleague, Martin Šonka is fully engaged in aerobatic flying. His greatest achievements include winning the World Series Red Bull Air Race 2018 or gold medal from the 2016 European Aerobatics Championships. 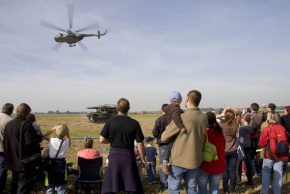