The prison service to repel the attack on the escort bus

One of the preventive anti-pandemic measures of the Prison Service of the Czech Republic was to restrict the transport of prisoners using escort buses. The spectators of the NATO Days in Ostrava & Czech Air Force Days can look forward to a demonstration of defence against an assault and attempt to free the prisoner!

Typical buses with a purple stripe of the Prison Service drives between prisons throughout the Czech Republic and are thus known to the general public. There is a large concentration of them, especially in the so-called escort days when the Prison Service transfers prisoners according to current needs. In the demonstration, the spectators will see the vehicle conducting a regional transport of prisoners during which they will be attacked. To handle this dangerous situation, the escort will require the assistance of accompanying vehicles. 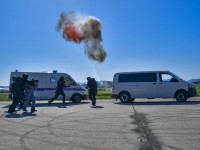 "The prison service is not only a traditional participant at NATO Days but also one of the security system branches that managed its tasks very well during the COVID-19 epidemic and prevented the disease from spreading in prisons," emphasizes Zbyněk Pavlačík, chairman of Jagello 2000. "In addition to their truly dynamic demonstration, members of the Prison Service will also be among the awarded at Saturday's ceremony."

During the state of an emergency, the Prison Service faced a challenging task so that the COVID-19 infection would not spread among prisoners and the officers in such a way that the normal operation of prisons would not be disrupted in any way. In addition to the introduction of increased hygienic measures, the number of transfers between prisons has also been reduced. Furthermore, to minimize personal contact the connection of prisoners with their lawyers and courts through video calls was expanded. However, even with these measures, a few members and civilian staff of the Prison Service were diagnosed with the disease, fortunately, further transmission among their colleagues and prisoners was prevented.