USA: Premiere of Stryker and return of American giants

The United States being the Special Partner Nation of this year’s NATO Days in Ostrava & Czech Air Force Days extends its already confirmed participation. Whereas the U.S. Army has prepared another premiere presentation in the form of Stryker armoured vehicle, the U.S. Air Force and the U.S. Air National Guard return with aerial giants including the B-52 bomber, the KC-135 tanker and the C-17 transport aircraft, which will be accompanied by a pair of F-16 fighter jets at static display.

The United States which represents the Special Partner Nation of this year’s NATO Days, has been a regular participant at Mošnov Airport since 2007, this year, however, will bring ground forces armoured vehicles with them for the first time: „Participation of the U.S. being the Special Partner Nation may be perceived a certain symbol due to the extent which the U.S. had contributed to the establishment of independent Czechoslovakia. We are thus delighted that the U.S. took this special role right this year, with the greatest representation in the Central Europe on top of it,” emphasizes Zbyněk Pavlačík, chairman of Jagello 2000. 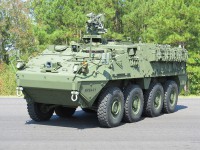 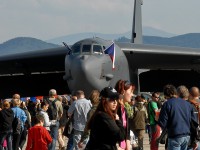 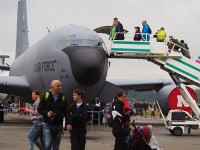 The static exposition of the U.S. Army will thus be extended by a premiere participation of the Styker wheeled armoured vehicle which some of the visitors may remember from operation Dragoon Ride, during which the U.S. Army convoy moved across the Czech Republic back in 2015. Stryker will joint the already confirmed ground forces equipment of the M1 Abrams main battle tank and the M2 Bradley infantry fighting vehicle, which will be showed alongside with a pair of AH-64 Apache attack helicopters.

The popular aerial giants including the B-52 Stratofortress strategic bomber and the KC-135 Stratotanker aerial refuelling aircraft will also return. Whereas the former will be sent from the U.S. Air Force, the latter will come from the Nebraska Air National Guard. The presentation will be enriched by the members of the Arizona Air National Guard which will arrive with two F-16 Fighting Falcon fighters, the most common fighter jets nowadays as this fact is confirmed by their participation at NATO Days also from the Belgian, Danish, Dutch and Polish air forces this year.

„The last three mentioned aircraft will also take part in the international tactical exercise Ample Strike that annually takes place in the Czech Republic in September. Regular participation of the United States in such exercise strengthens not only the Czech-American relations, but also the interoperability of both air forces,” appreciates the Czech Air Force Commander, Brigadier General Petr Hromek.

The U.S. Air Force will also be represented by the C-17 Globemaster III transport aircraft, which returns to Mošnov Airport after eleven long years. This aircraft will specially for the purposes of NATO Days arrive with the UH-1Y Venom utility helicopter which premiere will be provided by its manufacturer and the main partner of the event Bell Helicopter.