Another premiere presentation for this year's NATO Days in Ostrava & Czech Air Force Days has been prepared by the Austrian Air Force. Visitors may look forward to a debut of two Pilatus PC-7 Turbo Trainer aircraft at the static display.

Since its first participation in 2010, Austria has not missed any year of NATO Days and gradually presented a wide range of its air capabilities from combat jets and transport aircraft to helicopters. This time, the list will be prolonged by Pilatus PC-7 Turbo Trainer which serves for both initial and advanced training. 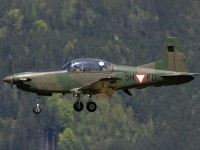 “Austria does not belong among those countries which should celebrate the anniversary of Czechoslovakia's independence, we are thus more than glad that our current relations have been on such good terms so Austria has become a regular participant at NATO Days and will join us this year again, despite the fact that both of us perceive the year of 1918 much differently,” emphasizes Zbyněk Pavlačík, chairman of Jagello 2000. “By this year's participation, Austria extends its so-far presentation of jet trainers at our event - in 2016, visitors could have had a closer look at the Saab 105 twinjet trainer both in dynamic and static displays,” adds Pavlačík.

PC-7 Turbo Trainer has been manufactured by a Swiss company called Pilatus Aircraft, and has served for pilot training in the Austrian Air Force since 1983. Besides the training role, it can operate as a patrol aircraft or be armed with gunpods and light rocket launchers. Due to this fact, PC-7 had also been used as a light combat aircraft in several counterinsurgency operations mainly in African and South American countries. Thanks to its capabilities, it has currently been operated by the Swiss aerobatic team, the PC-7 Team.