British Falcons and Tigers to swoop over Ostrava

Another premiere attractive displays at 15th anniversary of the NATO Days in Ostrava & Czech Air Force Days will be provided by the British Armed Forces. Two parachute display teams will present themselves over Mosnov airport – the RAF Falcons and the Royal Army’s Tigers. They will be accompanied by the King Air Display Team.

Until now, NATO Days visitors could see in action only Czech paratroopers performing opening or closing jumps, usually with flags. But both the Falcons and the Tigers are regular aerobatic teams that are not “only” jumping, they do much more and their participation promise spectacular show. 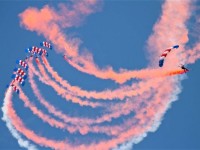 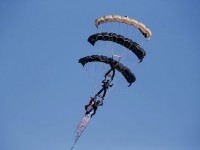 “These teams perform group flight, figures or elements in the same way as their counterparts with airplanes. However, parachute teams are much more influenced by gravity that limits their display. For impressive effect and better visibility of their movement in the air, team members have smoke grenades attached to their legs,” states Zbyněk Pavlačík, Jagello 2000 Chairman. “We should also bear in mind that their performance is more dependent on actual weather conditions, especially clouds and wind, so let’s hope the weather will be favourable.”

The Falcons belong to the Royal Air Force and they have 15 members, 11 of them are performing airborne. One of the members is Graham Liggins, a civilian volunteer, who has been commenting the team displays for 19 year and who will provide us with details and excellent description of the show. The Falcons use various aircraft - C-130J Hercules, CH-47 Chinook, HC2 Puma or C-47 Dakota. It is not known which one they will have in Ostrava, as it is dependent on the airplanes availability and also type of display.

The Tigers count only seven members and are part of the Royal Army. Contrary to the Falcons, they conduct a contact canopy formation display or wingsuits. So each team has different kind of displays and they complement each other. The Tigers do not have their own aircraft, so they will use one provided by the Flight Training Centre, which is part of the LOM PRAHA, main strategic partner of the event.

Visitors can expect also King Air Display Team, a presentation of the RAF training aircraft, which could be seen in Ostrava last year at static display or in 2011 and 2012 at flying display. This display team was not active in previous years, but now returns at the occasion on the 100th anniversary of its 45 (R) Squadron. This anniversary will be commemorated also by special paint scheme of the airplane. Ostrava will be one of only three places outside of the United Kingdom where it will be performing this year, the other two are ILA fair in Berlin and Malta International Air Show.