Croatia will debut with the Wings of Storm

The 18th NATO Days in Ostrava & 9th Czech Air Force Days will bring not only traditional participants, but also attractive premieres. A dynamic display of Croatian aerobatic team called the Wings of Storm (Krila oluje) is one of them.

This six-member group of the Croatian Air Force flies PC-9M aircraft which are well-known to regular visitors of NATO Days thanks to both dynamic and static displays conducted by the Slovenian air force. This time, there will be a chance to see them in group aerobatics. 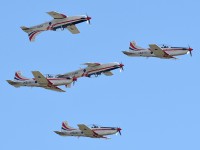 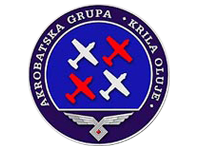 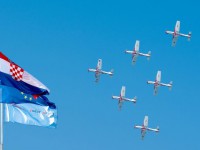 “Croatia is already the 23rd country out of 29 NATO member states as well as the 30th country participating in our show, and we are delighted that its premiere at Mošnov Airport will be in the form of the Wings of Storm aerobatic team in particular,” welcomes Zbyněk Pavlačík, chairman of Jagello 2000. “Last year, the team received an award of the display director of SIAF for the technically most precise dynamic display, and it was also awarded at the British RIAT two years ago, so visitors may look forward to truly top aerobatics.”

The Wings of Storm aerobatic team, whose aim is to present capabilities, training and team work of the Croatian Air Force, performed for the first time in 2004 as a four-member group. The numbers grew up to five members then and since 2009, it has been a six-member aerobatic team. In addition, these pilots are flight instructors from the Zeminuk military base located near Zadar who primarily provide training for other pilots. Unlike most aerobatic teams, performing is not their full-time job and they use aircraft which does not possess any specific adjustments. Nevertheless, the above mentioned awards show that they can beat even the specialized teams.

During the performance when the speed reaches up to 550 km/h, the aircraft fly at distances less than two meters from each other. Pilots do not use any specific devices, therefore they have to rely on their own judgment and skills in order to keep the aircraft in the right position towards the rest of the group.

After the Orlik Aerobatic Team of the Polish Air Force, the Wings of Storm are the second aerobatic group performing with turboprop aircraft at NATO Days. Pilots of the Polish eight-member team, that presented itself in 2015, are also flight instructors, however, their PZL-130 are adjusted for displays and contain, for example, smoke generators. Orlik can thus use special smoking effects compared to the Croatian pilots who offer pure aerobatics.