MiG-21 returns to the Mosnov Airport after 23 years

The legendary Soviet fighter jet MiG-21 will roll on the Mosnov Airport again after almost quarter of a century. The Romanian Air Force is sending its MiG-21 LanceR for both static and flying display to this year’s NATO Days in Ostrava & Czech Air Force Days. The C-27J Spartan will serve as their support plane, but will be stationed at static display as well.

It is worth noting that the Mosnov Airport was a home base of the Czechoslovak MiG-21s from the 1960s. The last, already Czech, MiG-21MF took off the airport in September 1993. Two aircraft of the type were later part of the opening flypast at NATO Day in 2004. However, it will still be a premiere this year, because Romania will present its upgraded version designated LanceR. These can carry both Russian and western-made weapons and never appeared in Ostrava. 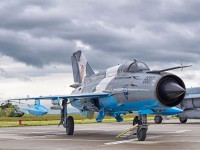 “The MiG-21 display is greatly appreciated at all air shows and thanks to Romania, which is currently the only country that can provide it, it will come to NATO Days, too. Romania plans to replace them with the US-made F-16s, so this can be also one of the last opportunities to see them,” notes Zbyněk Pavlačík, Jagello 2000 chairman. “We can reveal now that the Romanian MiG-21 had to appear at NATO Days last year, but Romania then cancelled all its presentations. So we are glad we will have it now and that NATO Days’ visitors can look forward to seeing these legendary airplanes.”

“Romanian MiG-21s LanceR were in the Czech Republic last time 14 years ago, in 2002 at the CIAF air show in Hradec Králové,” adds Jan Čadil, editor-in chief of Aviation+astronautics magazine.

The MiG-21 belongs among legendary Soviet supersonic jets. It has characteristics delta wing and can reach the speed of Mach 2. It was design to be a fighter, but some version are modified for ground attacks. It was a part of standard equipment of the Eastern bloc armies, what helped it to be the world’s most produced supersonic jet; more than 11,000 were made between 1959 and 1985. It was in the inventory of the Czechoslovak, and later Czech, Air Force from 1960s till 2005, when it was replaced by JAS-39 Gripen.

Thanks to its large numbers, it was used in many armed conflicts, notably, the Vietnam War, the Middle East conflicts, or War in Yugoslavia. It is still serving in two NATO countries – Romania and Croatia, since it was removed from active service in Bulgaria at the beginning of 2016.