Today marks the end of the 21st year of the NATO Days in Ostrava & Czech Air Force Days at the Leoš Janáček Airport Ostrava. Once again, this year has been unique in many respects. Spectators were able to attend the show in person after a break last year. For the first time in the history of the event, they registered in advance while proving their so-called covid competence. The largest European security show commenced its third decade of existence with a demonstration of state-of-the-art technology and clearly showed the visitors the future of the equipment the NATO militaries.

In a turbulent time, which, due to covid measures, does not want to organize large events, it is necessary to develop a functional scheme for similar situations. The organizers of the event, in cooperation with the National Agency for Communication and Information Technologies (NAKIT) and Ticketportal, prepared a system and clear instructions on how to register, validate covid certificates and pair them with a ticket in a form that allows authorized entry and fast check-in. visitors. "If covid or other restrictions apply to some extent, no major event, whether a music festival or a sports tournament, can do without such a system of organizing. We are ready to provide our experience to other organizers of large events, “said Zbyněk Pavlačík, Chairman of Jagello 2000. "It was a big challenge for us, we had nowhere to learn. But today we can say that the system has proved its worth and has significantly helped the smooth running of the event in terms of attendance and epidemiological safety, "added Zbyněk Pavlačík. A total of 60,000 people visited the event in both days. 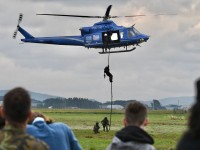 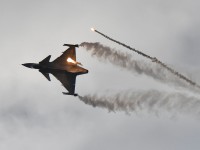 Technology in the concept of armies, security and rescue services is always one of the best that the area has to offer. The organizers and their partners showed visitors the maximum possible. The F-35A Lightning II premiered in the V4 countries and the MQ-9 Reaper in Europe, representing the current cutting edge of modern technology in the world. The progress in the modernization of the Army of the Czech Republic was demonstrated, for example, in the aviation sector, which was also visited by the Prime Minister of the Czech Republic, Andrej Babiš, and the Minister of Defense of the Czech Republic, Lubomír Metnar. Dynamic and static demonstrations of all participating components were constantly surrounded by spectators, who very often spontaneously applauded the performances. The weekend program of the NATO Days in Ostrava & the Air Force Days of the Czech Armed Forces concluded the joint flight of six helicopters consisting of Mi-24/35, Mi-171, W-3A Sokol, UH-60 BlackHawk, AS332 Super Puma and AW109. But before that happened, visitors had the opportunity to see a demonstration that was a surprise of Sunday's program. This was a joint jump of Czech and Israeli paratroopers from a Czech CASA transport aircraft. It was attended by instructors of airborne training of ACR units and paratroopers of the Israeli Defense Forces. 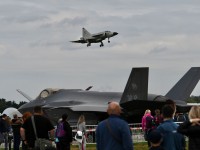 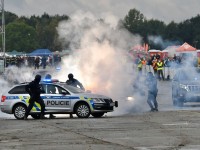 The 21st year of the NATO Days in Ostrava & the Czech Air Force Days 2021 was again unique in many areas. Behind its successful implementation is a large team of organizers, partners and institutions. "Without their actions and help, it would not be possible to organize it, and I want to thank them all in this way. Our thanks also go to the audience, who have kept our favor, "said Zbyněk Pavlačík, Chairman of Jagello 2000, who is the main organizer of the event.