Romania, which has taken over the role of the Special Partner Nation of NATO Days in Ostrava & Czech Air Force Days for this year, will delight not only fans of aircraft but also of ground equipment and technology. Romania will present armoured vehicles led by the TR-85, as well as equipment from the Ministry of the Interior.

The concept of the Special Partner Nation (SPN) is not only focused on the presentation of technology and equipment, but also the defence industry of the country, and in this spirit Romania formulated its presentation at NATO Days. Visitors can look forward to the tank TR-85, which was developed by the Romanian state-owned company ROMARM and is in service only in the Romanian Army, or an armoured fighting vehicle Piranha III, which was produced by the same company under a Swiss license. These will be joined by the self-propelled anti-aircraft system Gepard. The Ministry of the Interior will then present the equipment of the Emergency Department, including a mobile WMD centre, a field hospital or a mobile control centre. 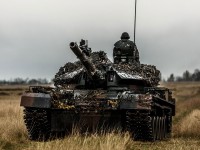 "The list of ground equipment of the Romanian security forces is really packed, and Romania is fully using its SPN status," says Zbyněk Pavlačík, chairman of Jagello 2000. "Like the Czech Republic, Romania commemorates the anniversary of accession to the North Atlantic Alliance. Thus, we can show the cooperation of the Allied armies when the Romanian TR-85 will join a dynamic demonstration of the Czech Army.”

Besides, the development of this tank is directly related to the events in Czechoslovakia, when Romania, after the events of 1968, decided to separate its defence industry from the rest of the Eastern Bloc. The TR-85 entered the service in 1986 and it is the main battle tank and the backbone of the Romanian armoured units since then. Since 1996, the TR-85s have undergone an overall upgrade to NATO standards. Currently, the Romanian Army has about 60 modernized tanks TR-85M1.

The participation of Flakpanzer Gepard marks the first performance of a self-propelled anti-aircraft gun on NATO Days. It is characterized by high mobility and short reaction time, which makes it suitable for air defence. For ground combat, a pair of 35mm cannons can be loaded with anti-tank ammunition. Currently, apart from Romania, Gepard remains in service in Germany or Brazil.

The Piranha armoured vehicle is based on an 8x8 chassis and was developed by the Swiss company Mowag in the late 1990s. For Romania, however, these vehicles are manufactured under license by ROMARM. Piranha is armed with a crewless turret with a 30mm cannon and a 7.62mm machine gun, and in addition to a three-man crew can hold eight more soldiers.

The presentation of the Emergency Department will then focus on rescue equipment of all types. At the airport in Mošnov, it will be possible to see equipment for rescue and search operations, hydraulic platform, ambulance, as well as a tent for refugees or mobile illuminating generator.