The Saab company will present its state-of-the-art Gripen E aircraft for the first time in the region of Central and Eastern Europe. Thanks to the general partner of the event, visitors to the NATO Days in Ostrava & the Czech Air Force Days will be able to see one of the newest products of the European aviation industry.

The JAS-39 Gripen E is an aircraft filled with the latest technologies. The difference compared to previous versions may not be obvious at first glance, nevertheless the Gripen E represents a significant technological advance. Its revolutionary avionics and state-of-the-art artificial intelligence systems allow the pilot to focus on the mission, and electronic warfare sensors protect the pilot and the aircraft in combat situations.

"The JAS-39 aircraft have been associated with our event since 2005, when the Czech Air Force recently added them to its inventory as a replacement for the decommissioned MiG-21. Since then aircraft of all European operators have presented here, and have also demonstrated their qualities in impressive dynamic displays. However, those are C and D variants, so we are pleased that, that thanks to the support of our general partner, the Swedish company Saab, we will now be able to welcome the aircraft in the E version as a first public event in the region," says Zbyněk Pavlačík, Chairman of Jagello 2000.

"We want to present to the visitors of the NATO Days in Ostrava & the Czech Air Force Days the best that exists in the field of military aviation technology in the world, and Gripen E is the absolute world leader. For us, Gripen E is the logical successor of the C / D variant, which the Czech Air Force has been successfully operating since 2005, and I dare say that they are very satisfied with them,” says Jiří Verner, former Czech Air Force Commander, now Saab Country Manager for the Czech Republic and Slovakia. 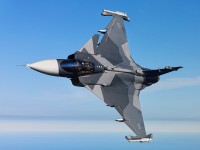 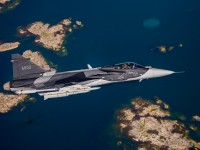 Gripen aircraft are able to operate from very short runways, from road bases and in case of emergency only from paved roads, which is a major advantage in the event of damaging of the home base. In addition to the high operational capability of Gripen aircraft, an easy, fast and efficient modernization cycle is also crucial. Other advantages of the Gripen aircraft, which concern both the latest version of the Gripen E/F and the Gripen C/D version, include the possibility of equipping them with the most modern Beyond Visual Range Air-to-Air Missile (BVRAAM) Meteor missiles.

Compared to other equivalent aircraft, Gripen E is also quite economical, when the price of a flight hour and the total cost of its operation are 5-7 times lower.

"If the aircraft to replace the ever modern and technologically advanced Gripen C/D should be the Gripen E, the Czech Air Force will be able to continuously fulfill its missions and effectively protect the airspace of our country and partners within the North Atlantic Alliance, without they put an extreme strain on the army budget, thus de facto making it impossible or slowing down the necessary modernization of the entire army,” adds Jiří Verner.