Visitors of NATO Days in Ostrava & Czech Air Force Days can again look forward to the participation of the Swedish Air Force Historic Flight, which will present three aircraft from its collection - SK 35 Draken, AJS37 Viggen and J32 Lansen. And even though two of them have already shown up in the past, it will be a triple premiere.

The Swedish Air Force Historic Flight will present itself to visitors of NATO Days for the fifth time already, however, with aircraft which have not yet been seen at Mošnov Airport. There will be a Central-European premiere of Saab J32 Lansen, other two aircraft will be introduced in an unseen configuration - this time, there will be twin-seat AJS37 Viggen and single-seat SK 35 Draken, whereas in the previous years the versions had been the other way round. These aircraft will also be accompanied by the Saab 105 trainer which will serve as a support aircraft. 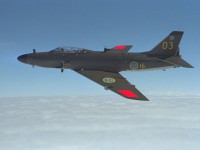 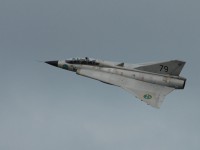 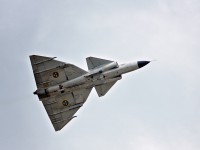 “Some of you may remember that the participation of Lansen had been envisaged for the last year's NATO Days, but due to technical failure and bad weather later on did not arrive. The Swedish officials, however, showed interest in presenting the aircraft this year in Ostrava, therefore, we are truly pleased that we can confirm it now alongside with other aircraft of the Swedish Air Force Historic Flight, which are very popular with visitors,” emphasizes Zbyněk Pavlačík, the chairman of Jagello 2000, and adds: “Participation of so many aircraft from its collection is quite remarkable and it would not be possible at our event without the support of the Swedish firm Saab, which has been a long-term partner of NATO Days.”

The collection of the Swedish Air Force Historic Flight consists of jet aircraft of different generations manufactured by Saab. The oldest one is J29F Tunnan known as “the flying barrel”, which was at NATO Days in 2016 for the last time. Its successor, J32 Lansen, was developed in the 1950s and played a role of both fighter and attack aircraft. Lansen is also the first transonic aircraft of the Swedish origin. After its withdrawal from operations, these aircraft were used as target tugs or collected air samples at high altitude.

Saab SK 35 Draken then represents the first Swedish-made supersonic aircraft which is typical for its double delta-wing and which was primarily used for air combat. Its direct successor, AJS37 Viggen, also conducted reconnaissance and possessed air-to-ground capabilities.

In addition, this year's NATO Days will also provide visitors with dynamic displays of the modern generation of Saab's aircraft represented by JAS-39 Gripen from both the Czech and Hungarian Air Forces.