The Belgian F-16 Demo Team to show its Dark Falcon

The Belgian Air Force confirmed its participation at this year's NATO Days in Ostrava and Czech Air Force Days. It sends the F-16 Demo Team with a specially coloured machine, accompanied by a C-130 Hercules transport aircraft.

The F-16 multipurpose combat aircraft of the Belgian Air Force was last seen in Ostrava last year, but now it will be its premiere flight show that will be spiced up by the unique look of the airplane. Its theme is called "Dark Falcon" and symbolizes the international partnership of the Belgian Air Force. This symbolism will be enhanced by special adaptation according to the country in which it will perform. 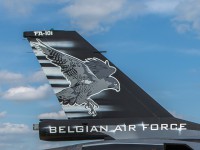 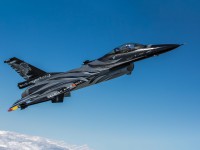 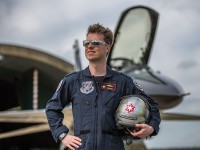 "The Belgian F-16 Demo Team was to be introduced at NATO Days in 2016, unfortunately, its participation was cancelled shortly before the event. However, this year's premiere, when we commemorate the 100th anniversary of the independent Czechoslovakia, is even more symbolic because Belgium was among the first countries to recognize our new state, "says Zbynek Pavlacik, chairman of the Jagello 2000." It will also be the second F-16 aircraft to fly over Mošnov this year, with Denmark also sending its machine for the dynamic display. "

A highly experienced Capt. Stefan, Vador' Darte, with nearly 3,000 hours on the fighter jet, is the Belgian display pilot for the next three years, so he will be the one showing both his and aircraft skills.

A C-130 Hercules transport aircraft will also arrive from Belgium, it will be displayed at a static apron.