The legendary Phantoms will arrive from Turkey

After eight years, F-4E Phantom aircraft of the Turkish Air Force are returning to NATO Days in Ostrava & Czech Air Force Days. These iconic aircraft rarely present themselves at air shows, and due to their gradual retirement, their participation in Mošnov may be one of the last chances to see them.

Last year, the Soloturk demo team with an F-16 aircraft shone with its energetic performance over Mošnov Airport. This year, Turkey will be represented by a pair of legendary F-4E Phantom II aircraft. Although they have been in the service for almost fifty years, thanks to modernization, they are still an important element of the Turkish defense. 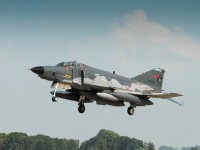 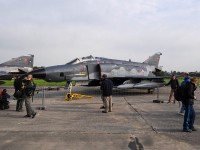 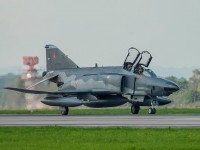 "The F-4 Phantom II is the true definition of the third generation of combat aircraft, which dominated especially in the 1960s. Compared to more modern machines, this icon of the Vietnam War may surprise with its size, reaching a length of almost twenty meters, or a maximum speed exceeding Mach 2.2," says Jagello 200 Chairman Zbyněk Pavlačík. "Thanks to that, it is still the most produced American jet. Today, however, only a few countries keep Phantom in active service, which is why we are glad that the Turkish pair will become part of our event in the form of a static display," adds Pavlačík.

McDonnell Douglas F-4 Phantom II is a heavy twin-engine fighter, which over time has gained skills in other areas, including reconnaissance and ground support. In total, more than five thousand Phantoms were produced, which surpasses even other legendary F-16 machines, which, together with F-14s and F-15s, replaced Phantoms in the air forces inventories.

Phantom became a significant export item of the American defence industry, when it was purchased by a number of Allied countries. At present, the F-4 remains in various variants also in the inventory of South Korea, Greece and Iran.

The Turkish Air Force has thirty of these aircraft in a modernized version of the F-4E-2020 Terminator with significantly improved avionics and adaptation to modern ammunition. Their decommissioning is expected around 2030, when they should be replaced by a new type of Turkish-made TF-X aircraft.