The NATO Jubilee Days in Ostrava endured in an exceptional situation

This year's 20th NATO Days in Ostrava & Czeche Air Force Days were extraordinary. Unlike most similar events abroad, which did not take place this year due to the situation with coronavirus, NATO Days in Ostrava allowed spectators to experience the jubilee year of the event through modern technology. This year's topics were 75 years since the end of World War II, 15 years of JAS-39 Gripen aircraft in Czech Air Force and honoring members of the security forces and the Integrated Rescue System for their efforts during the spring coronavirus crisis. The program focused as much as possible on dynamic demonstrations. 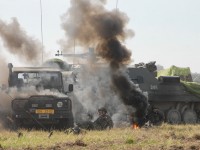 This year, 8 countries participated in the NATO Days in Ostrava & Czech Air Force Days. The special partner nation of the event this time was the Czech Republic, which replaced the originally announced Sweden, which should take over this role in 2021.

The award of the Mayor of Ostrava for the best air demonstration was won by the Hungarian display pilot Maté Majerik with his Saab JAS-39 Gripen aircraft. 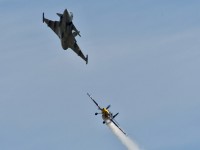 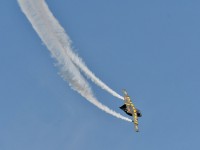 The NATO Days in Ostrava are usually attended by around 200,000 spectators every year. This year, the organizers faced a difficult decision whether to organize the event, either in a limited form, or, like most organizers of similar activities around the world, to cancel it. After intensive negotiations with hygienists and epidemiologists, a way was found to implement the action, while respecting all regulations and criteria for preventing the spread of coronavirus. Based on the data of television viewing from previous years, the amount of which exceeded the number of visitors directly in the area, the organizers decided to make the most of the possibilities of Czech Television and the Internet. "We believe that we will experience this experience only once every 20 years and it will not be repeated. However, the experience with online transmissions gained this year will be important for the future as well," said Zbyněk Pavlačík, CEO of the Jagello 2000, which organizes NATO days. "For the first time, a similar event used Wave Relay technology, which, based on the principle of a personal camera, enabled viewers to see what some actors in the dynamic demonstrations saw," Pavlačík added.