A display by the Typhoon Display Team of the British Royal Air Force, one of the most famous solo flight performances, is returning to the NATO Days in Ostrava & Czech Air Force Days. This year they return with a new pilot who will once again show the capabilities of this powerful twin-engine aircraft.

Eurofighters are traditional participants at the NATO Days. We can recall 2016, when dynamic display was demonstrated by all five of its European operators. The British one last appeared over Mošnov Airport three years ago during the last public appearance in the career of the then pilot Jim Peterson. His successor is flight lieutenant Adam O'Hare, but three groups of aircraft mechanics and other personnel are an integral part of the team as well. 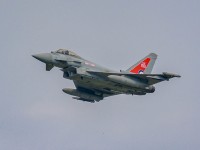 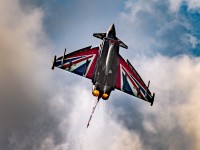 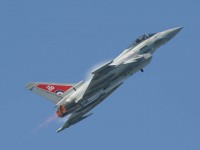 "British Typhoons first appeared in Mošnov fifteen years ago, when these aircraft first landed in Central Europe. We are glad that they have been appearing here regularly since then, now we can look forward to the aircraft in the themed coating of the British Union Jack flag," says Zbyněk Pavlačík, chairman of Jagello 2000. "Due to their qualities, powerful performance and numbers in the air force, Typhoon aircraft are also significant contribution to security on the European continent."

Eurofighter Typhoon is a multi-purpose twin-engine fighter of the fourth generation, which shares the atypical wing configuration with its European fellows - French Rafal and Swedish Gripen - specifically a distinctive delta wing and so-called canard surfaces. It is also characterized by a distinctive pair of square holes for air supply to the engines, which is located under the fuselage. Typhoons play a key role in the British Air Force. They were originally intended only to protect the airspace. In the FGR4 version, however, the Typhoons can perform a wider range of missions, including attacks on ground targets, which was used, among other things, in air strikes against the so-called Islamic State. The RAF currently uses a total of 140 pieces of this aircraft.

Eurofighter is a symbol of European defense cooperation at the international and corporate levels. The program was initiated at the end of the Cold War, given the need for European states not involved in the F-16 program to modernize their air forces. The first takeoff took place in 1994. In 1998, the production of 620 pieces was agreed, mainly for European customers - the United Kingdom, Germany, Spain, and Italy. They were joined by Austria and some Gulf states, which increases the number of currently delivered and ordered pieces to 700.