The medium-weight multi-role twin-engine turboshaft helicopter AS365 Dauphin has been produced since 1970s. The helicopter has undergone several modifications including the current one - AS365N3+, which is the most popular of all the versions thanks to its speed, load, and capability to travel long ranges as well as operate in extreme climate conditions. 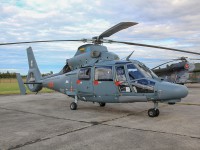 AS365 in all of its versions has been used by both civilian and military operators for multiple purposes, such as combat operations, law enforcement, VIP transportation, search and rescue (SAR) or passenger shuttles to offshore oil platforms. Due to this wide range of missions, Dauphins are operated by numerous actors, for example, by the French Naval Aviation (l'Aéronavale) in both the civil version AS365 Dauphin and the military version AS565 Panther. The latter possesses capabilities for direct combat, fire support, anti-submarine warfare, medical evacuation, or previously mentioned SAR.

Other European operators are, for example, Lithuania, which uses the AS365N3+ version not only for SAR, but also for environmental monitoring, or the British Army Air Corps, where Dauphins serve for transport purposes. Looking at non-European operators, the U.S. Coast Guard needs to be mentioned as it operates a modified version of the helicopter called HH-65 Dolphin that was specifically developed for the service only.

AS365 Dauphin, as well as all other helicopters developed by Eurocopter Group (Airbus Helicopters now), incorporates so called Fenestron - fully covered tail rotor.