NATO’s AWACS will perform a flypast and landing in Mošnov

„A plane with a dish“, or in other words Boeing E-3 Sentry of the North Atlantic Treaty Organisation, belongs among visitors’ favourite aircraft of NATO Days in Ostrava & Czech Air Force Days since its first participation in 2004. This year, the AWACS will perform the flypast on Saturday and will be exhibit at the static display on Sunday.

The Airborne Warning and Control System (AWACS) plane was so far exhibited only on static displays. Last year, the aircraft has performed a flyby, however immediately returned to its base. At this year’s NATO Days, the visitors can look forward on seeing the aircraft in the air on Saturday and on the ground on Sunday. Considering the AWACS’ arrival time, the plane will be on static display at the very end of the taxiway and thus the first aircraft to be seen by visitors incoming from the central parking on Sunday. 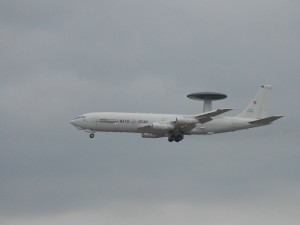 „NATO planes AWACS are very busy and their participation on NATO Days was very often cancelled due to the operational reasons. Therefore we are more than glad that the security situation enabled the aircraft’s arrival,” emphasized Zbyněk Pavlačík, CEO of Jagello 2000. “Moreover, thanks to its Saturday’s flypast and Sunday’s static display, its participation is even more interesting at this year’s NATO Days,” he concluded. AWACS is returning to static display after four years.

The AWACS plane will arrive from its home base in Geilenkirchen, Germany. Twelve years ago, this aircraft landed in Mošnov as the very first foreign participating aircraft of the NATO Days. Its radar, which is placed above the plane’s body, serves as the air radar station for surveillance and management of the combat aircraft operations.

The Alliance has sixteen planes with AWACS system, which are spread through the bases in Germany, Italy, Greece and Turkey. The Czech Republic entered the Airborne Warning and Control System Forces in 2011; therefore it is possible to find some of the Czech pilots and operators also in this unit. 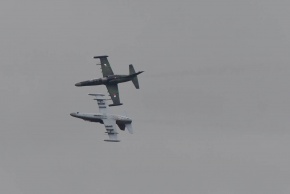