A giant that can take a lot. That, in a nutshell, is how one might define the C-5 Galaxy, a four-engine strategic transport aircraft designed for the U.S. Air Force by Lockheed Martin during the 1960s and 1970s. Its main purpose was to carry oversized and heavy loads between continents - such as M1A2 Abrams tanks, Apache or Chinook helicopters, and many others. But it could also hold, for example, 25,844,746 ping-pong balls, eight bowling alleys, or 24 Skoda Superb cars. 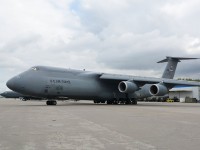 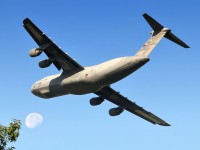 Today, most C-5s have already been upgraded to the C-5M Super Galaxy version. The upgrades included new avionics, landing gear, and, most importantly, more powerful engines. The C-5M Super Galaxy is equipped with five sets of landing gear, 28 wheels, and four General Electric CF6-80C2-L1F (F-138) commercial engines with 230 kN of thrust per engine. It can land on relatively short runways. The aircraft's "nose" and rear doors can be opened for transport purposes, allowing ground crews to load and unload cargo from both ends simultaneously, reducing cargo transfer times. In total, the C-5M Super Galaxy can carry over 127,000 kg of cargo or 350 people.

The sole user of this giant is the United States Air Force, which currently has about 50 aircraft in B/C/M versions. Since entering service in 1970, the U.S. has used Galaxy aircraft to support every major conflict in which it has been involved, from the Vietnam War to operations in Afghanistan. These aircraft are also available to other nations to transport personnel or equipment. However, they have also helped in humanitarian crises and evacuations.