A multirole single-seat and single-engine fighter with delta wing and canard configuration is besides classical airports also able to take off and land on the roads. In its basic configuration, the aircraft accomplishes fight, offensive attacks and also surveillance. The first prototype of Gripen, made by Saab Company in Linköping, took off on December 9, 1988.  Gripen was introduced to the service in 1993. The fighter uses RM12 engine with maximum thrust and afterburner 80.54 kN.  The preliminary serial piece of upgraded version of JAS-39C was flown on August 14, 2002. This type’s aircraft, alongside with two-seater equivalent JAS-39D, is equipped with new displays in cockpit and telescopic extension for in-flight refuelling. The possibilities of mounted gear and equipment are greatly expanded. 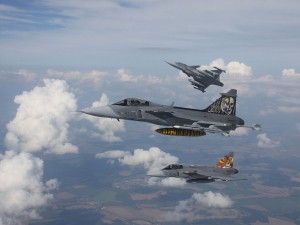 Gripens in the Czech Air Force Army have replaced legendary MiG-21s. The first six planes arrived to the home base of 21st Tactical Air Force Base in Časlav on April 18, 2005. All of them are part of the local 211st Tactical Wing.  The air fighters provide air security over the Czech Republic by being part of NATO’s Integrated Air and Missile Defence System NATINAMDS since June1, 2005.  The Czech Gripens are equipped with single 27 mm Mauser BK-27 cannon, air-to-air missiles AIM-9M Sidewinder and beyond visual air-to-air missiles AIM-120C-5 AMRAAM.