The legendary U.S. strategic bombers B-1B Lancer and B-52 Stratofortress will once again participate in NATO Days in Ostrava & Czech Air Force Days. The static display of these giant aircraft will be completed by the KC-135 Stratotanker tanker aircraft.

Two of the three types of current American bombers will neither be missed at the Mošnov airport this year. The supersonic B-1B Lancer dominated static displays last year as it debuted at NATO Days. Moreover, it will again be accompanied by the B-52 Stratofortress strategic bomber which had its premiere at the show already in 2010. 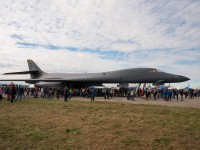 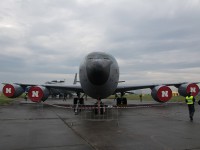 “These aircraft participate together in public events very rarely, therefore, it is quite unique that they may be seen at our show two years in a row,” emphasizes Zbyněk Pavlačík, the chairman of Jagello 2000. Both bombers also participate in a two-week exercise called Ample Strike at the turn of August and September which takes place in the Czech Republic.

The KC-135 Stratotanker tanker aircraft, which serves for air-to-air refuelling of both fighter jets and strategic bombers, will be another U.S. contribution to NATO Days.

Both bombers belong to the 307th Bomb Wing. B-1B Lancer, which possesses the stealth capability as well as variable-sweep wings, will come from the Dyess Air Force Base, Texas. B-52, on the contrary, operates from the Barksdale Air Force Base in Louisiana. Even though this aircraft has served in the U.S. Air Force since 1955, its capabilities are so crucial for the United States that its active service has been prolonged at least until 2040.