The Prison Service of the Czech Republic will once again present itself at NATO Days in Ostrava & Czech Air Force Days. Visitors will have the opportunity to watch a premiere dynamic display regarding preventing an escape of prisoners, or have a closer look at both historic and contemporary vehicles of the Czech Prison Service.

Similarly to last year's participation, members of the Czech Prison Service have prepared a dynamic display which will depict yet an unshown scenario. “We will present a display that is based on a true story from the past. It concerns an escape of prisoners from the production zone of the prison using a supply vehicle, and their subsequent capture by our task force,” reveals Petr Dohnal, the director general of the Prison Service of the Czech Republic. 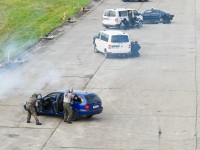 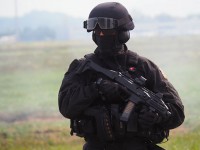 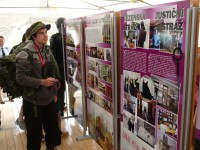 Regarding the static display, there will be the chance to see both a standard cell and a renovated cell with equipment, coercive tools used by prison guards, uniforms of prison service members or clothing of prisoners. Visitors can also look forward to seeing illicit objects which were seized from prisoners, such as hiding objects for mobile phones, tattoo devices, drugs, or weapons.

“A new feature of this year's static presentation is the Czech Prison Service vehicle fleet in both contemporary and historic version. Visitors will thus get the chance to see our vehicles, which has been currently used, as well as vehicles that served us in the past. There will be altogether 12 vehicles, buses included,” adds Dohnal. It comprises of, for example, escort vehicles type VW Crafter, VW LT 46, A31 or A21F.

Last but not least, visitors may find interest in presentation of development and mission of the Czech Prison Service or objectives of the Centre of Economic Activity, which employs prisoners, offers its furniture and metal products as well as provides services in the field of laundry and printing. In this regard, there will also be an exposition of prisoners' products or projects concerning the employment of the imprisoned.