Just like last year, one of the first NATO Days in Ostrava & Czech Air Force Days 2015 international confirmations comes from Greece. We are thrilled to announce that the Hellenic Air Force is sending again their F-16 Demo Team “Zeus”.

Spectators at the NATO Days in Ostrava last year's edition could see how Zeus confronted its flying skills with two other F-16 demo teams - the Danish and the Dutch. Unfortunately, this “clash” cannot be repeated this year. "The 'Zeus' made a great show last year and we believe that visitors will enjoy it again," says Zbyněk Pavlačík, head of the event´s main organizing agency, Jagello 2000. “Unfortunately, the Dutch F-16 Demo Team will not be coming, due to busy operational commitments that saw the team´s entire 2015 display season cancelled.     We are doing our best to provide the Zeus with another great “adversaries“ in the “fight“ for visitors' favour this September.” 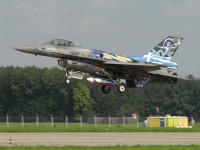 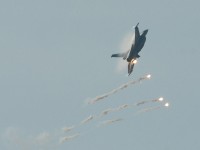 Captain Georgios Androulakis should again be both the display pilot and the head of the Zeus team distinctive F-16 Block 52+ aircraft, fitted with external fuel tanks on the upper fuselage. You can view Georgios´ last year´s display in Ostrava in the video below this article. "We hope that the quality of NATO Days in Ostrava & Czech Air Force Days will convince the Greek team to make Ostrava a firm venue in their display calendars so that they keep amazing us with their skills every year, “closes Pavlačík.