The Special Female Task Force was one of the highlights of the NATO Days in Ostrava & Czech Air Force Days in 2015. The visitors may once again look forward to their exhibition: the female unit will free the prisoners from kidnapped plane alongside with the Czech Task Force Unit.

The Female Company for Special Security Tasks (FCSST) underwent their first foreign experience last year at NATO Days. Their task was to free the prisoners from the terrorists’ camp with the help of the Czech 102nd Reconnaissance Battalion. This year’s exhibition will show the join dynamic display of the Jordanian female unit altogether with the Czech Police Task Force Unit during the rescuing of the prisoners from the kidnapped plane. 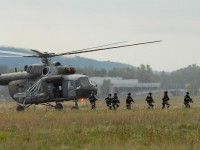 „The last year’s Jordanian presentation was memorable not only for us, but also for the female unit itself, as this was its first foreign show. For this reason, we are very glad that they have decided to repeat their participation at NATO Days. Moreover, the visitors will have an opportunity to see them in action from more detailed point of view, because this year’s presentation will be held on the concrete area much closer to the people,” highlights Zbyněk Pavlačík, CEO of Jagello 2000.

The Czech Regional Police Headquarters’ Task Force Unit is a frequent participant of the international dynamic displays at NATO Days; however they have so far performed joint displays only with their Polish counterparts, including the kidnapped plane presentation. This time, the Czech Task Force Unit will join the Jordanian Female Special Unit, what will be another interesting premiere at our event.

We must thank to the Czech Embassy in Amman, which secured the Jordanian exhibition for the second time. The embassy also serves as the contact NATO embassy for Jordan and as itself covers the activities of North Atlantic Treaty Organisation in Jordan. The embassy representatives oversee the building of the new center for the training of the servicewomen of Jordanian Armed Forces as well as of armed forces in the region. The facility is being built near Zarka city and is funded by NATO - Jordan Trust Fund III, of which the Czech Republic and Norway are the co-lead nations.