Mošnov was occupied by more than seventy aircraft

The giant air tanker KDC-10 of the Royal Netherlands Air Force was one of the biggest aircraft on static display, alongside the American strategic bomber B-52 and the Strategic Airlift Capability programme's aircraft: the C-17 Globemaster III. On the other hand, the aerobatic Team Orlik flew one of the smallest aircraft of all the participants - the turboprop PZL-130 - which despite having a height and wingspan of fewer than 10 metres received some of the greatest applause. 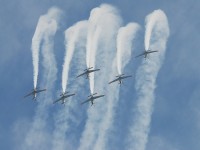 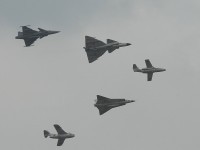 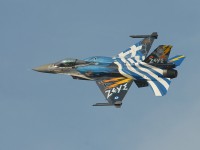 Overall it was the fighter jets that were represented the most with 22 aircraft. On the top of that, two more fighter aircraft acted as support - one for the French team RAMEX DELTA, and one for the Greek F-16 Demo Team Zeus. The most remarkable presentation was probably made my Swedish construction school which also included one of the peaks of the event: joint flypast of Tunnan, Viggen, Draken and Gripen side by side also with Saab 105, which had been previously intended only for support. Moreover, Saab 105 also presented itself in Austrian exported version as well – both on static and dynamic display. However we shell also mention the Czech aviation participation: the visitors might saw L-39 Albatros and L-159 Alca as well as their successor: the L-39NG demonstrator. 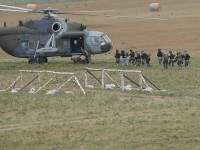 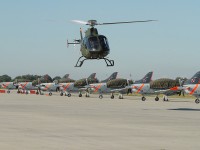 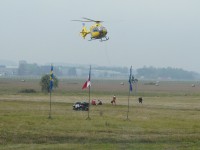 Further, we may mention 17 helicopters as the second largest group – three of them as emergency ones: EC-135 of Moravian-Silesian Rescue Service presented itself during the demonstration of rescue of patient out of difficult terrain and the Czech and Slovakian Police aircraft also engaged in the joint flypast. Furthermore the pilots of more than 5 countries showed their skills during the dynamic displays: Czech Mi-17 and Mi-24, German Bo-105, Italian AW-139M, Polish Sw-4 and British Lynx Mk8.

Other types of aircraft, which appeared at Mošnov Airport, were the transport ones including German Transall C-160, Polish An-28 or British King Air B2000 and already mentioned C-17. Thus there were 13 transport planes altogether from which 2 of them were intended only for support: Austrian C-130 Hercules and American C-17, which unfortunately did not perform a flypast, but only landed. 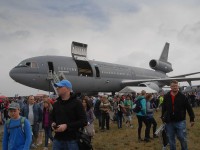 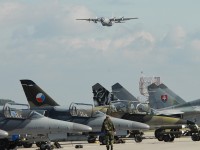 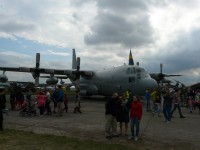 The list of the aircraft in Ostrava may be concluded by combined and hard to sort aircraft: three tankers of different sizes, Alliance E-3A AWACS early warning Boeing and finally convertiplane CV-22B Osprey. Moreover, the whole event was watched from the air by L-410FG Czech Army plane.