Polish presentation is extensive every year and it will be no exception now, when its air force will present at least 11 aircraft of different types. Eight of them will be turbo-prop PZL-130 Orlik of the aerobatic group of the same name. 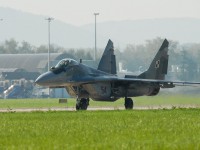 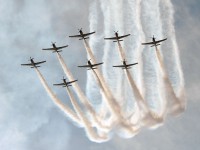 „Turboprop aircraft can, on contrary to jets, offer great manoeuvrability at low speeds and short distances, which are properties that the Orlik team showed in Ostrava two years ago with a great success," comments Zbyněk Pavlačík, Chairman of Jagello 2000 Association. „The team added some new figures to its performance, so we are glad we will have an opportunity to see it again.“

The Polish-made W-3 Sokol (falcon) helicopter will present itself in dynamic search and rescue mission - the same role it is used for in both Polish and Czech air force. It will repeat its display from the last year.

The MiG-29 fighter jet will be present at static display. The Polish Air Force acquired these aircraft also from the Czech Republic, which exchanged them for W-3 helicopters. The MiG-29s were upgraded, are still in active service and were used also in NATO's Baltic Air Policing. However, Poland considers their replecement by modern Western type.

The static displays will include another aircraft made in Poland, light tranport plane An-28. "The Polish Air Force sends to Mosnov also transport aircraft C-295M, it will serve primarily as a support aircraft, but it is possible that visitors will find it at static displays as well," adds Pavlačík. "Participation mentioned here concerns only the Polish Air Force, but Poland usually presents also other military branches or security services, so we can probably expect extension of its presentation at the NATO Days in Ostrava & Czech Air Force Days."