Visitors of this year's NATO Days in Ostrava & Czech Air Force Days can look forward to a premiere participation of another non-European country. The Saudi Hawks aerobatic team will appear with its show at the Mošnov airport for the first time in the Czech Republic.

Members of the Royal Saudi Air Force represent another non-European participants, which visitors will have a chance to see at this year's NATO Days, together with Canada and the United States. The Saudi Hawks aerobatic team will have a premiere display at Mošnov, marking its first public performance in the Czech Republic. The event will thus give the audience an opportunity to see two aerobatic teams during the weekend programme because the Polish Orlik aerobatic team returns to Mošnov after two years. 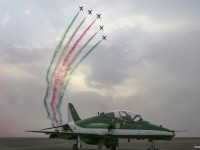 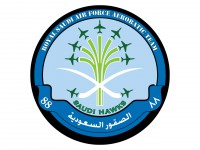 “Saudi Arabia is another Arab state after Jordan whose armed forces will participate in our show, and it is a great honour for us that we are able to attract participants from such distant countries,” says Zbyněk Pavlačík, the chairman of Jagello 2000, the main organizer of the show. “Similarly to the Canadian CF-18 fighter jet, our cooperation with organizers of air shows in Lens, France, and Sanicole, Belgium, helped with the participation of the Saudi Hawks.”

Saudi Hawks displays are often compared with the ones of the Red Arrows, not only because its former members have helped with the training of their Arab counterparts. Both teams also use the Hawk aircraft, the Saudi Hawks flies with seven of them, painted in green and white.

Saudi Hawks represents the official aerobatic team of the Royal Saudi Air Force which although performed for the first time in public already in 1999, European audience got the chance to see their performance twelve years later, when they participated in the Zeltweg air show in 2011.