Even this year, Slovakia will not miss the participation at the NATO Days in Ostrava & Czech Air Force Days. As in previous years, it will present its equipment from the Transport, Helicopter and Fighter Air Force, thus visitors can look forward to the C-27J Spartan, UH-60 Black Hawk and MiG-29 on static demonstrations.

Slovakia is one of the regular participants with its first participation back in 2002 and participated during the "pandemic year" in the form of the flyby of its MiG-29 fighters. In 2017, Slovakia took on the role of a special partner nation, and on that occasion it also presented one of the latest pieces of its aircraft - the legendary UH-60 Black Hawk. Visitors to NATO Days will be able to see this helicopter this year as well, in a static demonstration. The Black Hawk on the statics will also be complemented by a similarly legendary MiG-29 fighter and a C-27J Spartan transport aircraft. 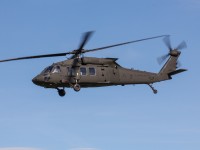 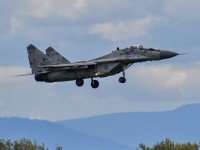 "The Slovak Air Force, as well as the Czech Air Force, is gradually upgrading from Soviet technology to the Western one, and now we can look forward to interesting representatives of both of these provenances," said Zbyněk Pavlačík, Chairman of Jagello 2000. "However, given the current situation, in addition to operational availability, all participation this year is conditional on favourable developments regarding Covid-19 and related measures."

The twin-engine MiG-29 fighter, which forms the backbone of the Slovak Air Force, was developed in the 1970s, but is still used by many air forces, especially from the former Soviet bloc. Slovak aircraft were modernized between 2005 and 2006 to the NATO standard, in 2023 it is planned to replace them with American fighters F-16.

On the contrary, the newer Slovak acquisitions include a pair of C-27 Spartan transport aircraft of the Italian company Leonardo-Finmeccanica, which have been operating in Slovakia since 2017. It is a twin-engine medium-range turboprop engine that is also used by the Italian, American or Bulgarian air forces.

The UH-60 Black Hawk multi-purpose helicopters from the American company Sikorski have been operating in Slovakia since the same year as the Spartans. Their versatility allows their use not only for combat operations and support of ground forces, but also for training and providing assistance in natural disasters.