One of the last year’s NATO Days in Ostrava & Czech Air Force Days highlight presentations were undoubtedly displays by the Swedish Air Force Historic Flight aircraft. This year, the spectators will have again a chance to admire the flying of the AJS 37 Viggen, complemented by the Saab 35C Draken. This will be the both types’ premiere joint participation at a single event in the Czech Republic as well as the very first appearance of the Swedish Air Force Draken here.

“The confirmation of the Swedish Air Force Historic Flight participation is thrilling news for all aviation enthusiasts. The SwAFHF last year’s dynamic presentations of Viggen and Saab 105 were true attention-grabbers and I believe it will be the same this year,” comments Zbyněk Pavlačík, head of the Jagello 2000, main organizer of the September show. “There has never been a Swedish Draken in the Czech Republic so far and the combination with the Viggen is really unique. Moreover, this will also be the only presentation by the SwAFHF in the continental Europe this year except the Nordic states.” 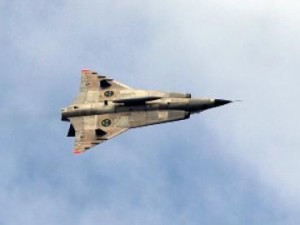 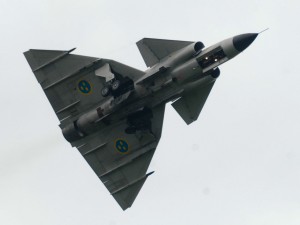 “The Draken is an extraordinary aircraft produced from the 1950s. Its main use was as a dogfighter. Its designers have employed a unique double delta wing, giving the aircraft superb manoeuvrability and distinctive looks,” adds Pavlačík. “Viggen is a direct successor to Draken, some 15 years younger. Viggen’s roles were broader and included reconnaissance and ground attack. This year’s presentation will therefore offer a unique possibility to compare side by side two consecutive generations’ aircraft of the Swedish design school that has so far culminated in the JAS-39 Gripen.

Saab 35 Draken is the first Swedish supersonic aircraft. The prototype first took-off in 1955 and the type was in production since 1974. Swedish Air Force Historic Flight operates the Draken in a Sk 35C variant. Except in Sweden, the type has seen service in the air arms of Austria, Finland and Denmark. As many as 651 pieces were produced and last left active service only in 2005.

Also in 2005, the last Saab 37 Viggen left active service. The type served only in the Swedish Air Force and boasted take-off and landing at very short distances as well as easy maintenance. Yet, due to the government export restrictions, the Viggen has never been exported. As many as 329 airframes were produced.