One of the leading producers of the Czech military and defence industry, the CZECHOSLOVAK GROUP holding, will showcase its products to both expert visitors and the general public. The modernised self-propelled DANA M1 M howitzer with a modified chassis and modernised communication, homing and control equipment in its extension, will be on display in the VIP Zone. The modern self-propelled mortar on the Pandur II 8x8 CZ chassis will also be displayed. 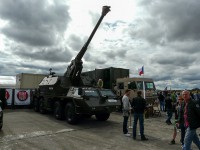 “The visitors can once again expect a broad and exciting presentation. The wheeled armoured TITUS vehicle on a TATRA chassis will be a part of the dynamic display programme. The vehicle is supposed to become a part of equipment of the Army of the Czech Republic in the near future, which will use them on missions, including crisis management deployments, both at home and abroad,” says Zbyněk Pavlačík, the chairman of Jagello 2000.

The TATRA TRUCKS car manufacturer will present its military TATRA Force and TATRA Tactic vehicles as well as the TATRA Phoenix Rally Dakar racing special, the special TATRA Terrno1 fire truck and its newest TATRA Phoenix limited Präsident edition truck, which was created to commemorate 120 years of car manufacturing in Kopřivnice. Avia Motors, which belongs to the CZECHOSLOVAK GROUP holding, will showcase its new Avia Initia D-Type vehicle in its Euro 6 version which officially unveiled on September 5 and is currently being serially produced.

A presentation tent, where the visitors will have a chance to learn about job opportunities in TATRA TRUCKS or the CZECHOSLOVAK GROUP, will be located in this zone near the big screen display.