The Little Lions will cope with the chemical incident, firefighters to present their equipment

The Fire Brigade of the Moravian-Silesian Region will not be missing on the fourteenth year of NATO Days in Ostrava & Czech Air Force Days. It is traditionally cooperating with the Fire Rescue Brigade from Hlučín and they will present together their technology. Firefighters will be also represented by their younger colleagues the Little Lions from Klimkovice.

"Support of the Fire Rescue Service is necessary for NATO Days. Not only spectators will have a chance to see equipment that firefighters use during the rescue of human lives, but their members contribute to the organization of the event itself and the fire security of the Weekend Show at Mošnov airport," comments participation of the firefighters key organizer Zbynek Pavlačík, Jagello 2000 chairman. Special guests of this year’s edition will be a Little Lions playgroup from Klimkovice, whose members are aged three to seven years. "Children will present four of the most common types of intervention – clearing the fallen tree, chemical accidents, flooding and traffic accident," Radka Langrová, leader of the group, promises.
Viewers can also enjoy a specialized equipment that has been used for humanitarian assistance after natural disasters in Slovenia or Bosnia and Herzegovina. This equipment is unique also it has the only rescue Fire and Rescue Service unit in the Czech Republic.
Hlučín Rescue Unit will display EC 250 kVA generator, which was deployed in February this year in Slovenia in Postojna, where it has supplied electricity for two weeks.
Furthermore, Hlučín firefighters will present a container for long-distance water transport HFS 150, which was used in May during extensive floods in Bosnia and Herzegovina. This container is able to pump water up to a distance of 1 km from the water source. 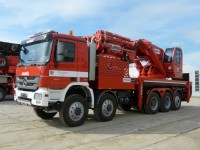 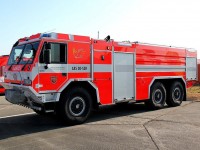 The firefighters are of course prepared for intervention in their home region. They are equipped with Rosenbauer RMV 2500 ventilator that is able to move up to one square kilometre of the air into the Klimkovice highway tunnel. They will present it together with HK 240 (AJ 80) crane, Huddig 1260 C backhoe, or MAN TGS truck with the Noteboom trailer that can carry almost 70 tons. 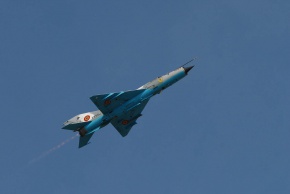