The premiere of the drone: the British unmanned aircraft Watchkeeper

Another big premiere at this year's NATO Days in Ostrava & Czech Air Force Days, as the British reconnaissance unmanned aircraft Thales Watchkeeper will arrive for the very first time. Furthermore, it is for the first time that such a large unmanned aircraft will be present at the event.

Even though UAVs such as Raven or ScanEagle have already appeared several times in the past, they were always smaller and with shorter operational range. Thales Watchkeeper, on the other hand, can be categorized as a larger unmanned aircraft and its size is three times bigger than the already mentioned ScanEagle. The British UAV will be placed on a static display. However, the aircraft will not arrive at the airport in Mosnov by itself as it has to be transported by truck and its operators from the 47th Regiment Royal Artillery. 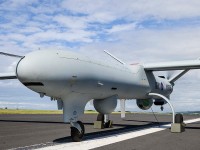 "The unmanned aircraft are taking upon a more important role in the armies all around the world, thus we are pleased to present a model from this category," notes Zbyněk Pavlačík, chairman of Jagello 2000. "Moreover, the Watchkeeper is one of the most modern aircraft in its category while it reached full operational capability only a year ago."

The Thales Watchkeeper WK450 was developed at the beginning of the millennium primarily as a reconnaissance aircraft. With a 10-meter wingspan and endurance of 17 hours, the Watchkeeper is one of the largest UAVs and can be equipped with LLM Fury missiles after a modification. So far, the only user of this aircraft is the British ground forces, which has about fifty of the Watchkeeper aircraft.  The aircraft went through its first deployment in Afghanistan in 2014. 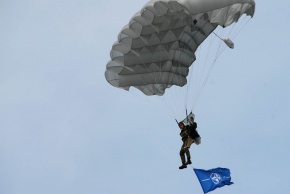