Austria is the tenth confirmed country, it will present PC-7 solo display

Less than five months before this year's NATO Days in Ostrava & Czech Air Force Days, ten countries have already confirmed their participation in this largest security show in Europe. Newly, viewers can look forward to a dynamic demonstration of the PC-7 of the Austrian Air Force, which will complement the performance of the Swiss PC-7 Team.

Austria has been a regular participant in NATO Days since 2010 and has shown a significant part of its Air Force armament, from the Alouette III helicopter through the C-130 to the multi-purpose Eurofighter Typhoon. Last year, the PC-7 Turbo Trainer also appeared on a static display for the first time. 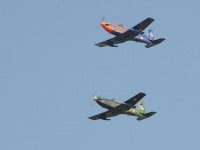 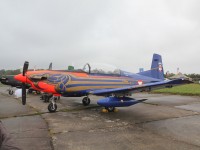 "Last year, Austrian PC-7 aircraft drew attention by its ‘snake’ camouflage, this year, we believe that PC-7 will again make a great show thanks to its excellent aerobatics and pilots’ skills. Austrian PC-7 will also have competition in the form of a group performance of the Swiss PC-7 Team," says Zbyněk Pavlačík, Chairman of Jagello 2000. "We could enjoy both the group and solo aerobatic performance the last year thanks to the Croatian Wings of Storm group Slovenian air force, both with the PC-9 aircraft, which was developed from PC-7. So, this year, we are going back to the previous generation of the aircraft. The visitors will be able to see that the PC–7 is still able to keep pace with its successors,” adds Pavlačík.

The PC-7 Turbo Trainer was developed by the Swiss company Pilatus Aircraft and has been used by pilots of the Austrian Air Force since 1983. It can also be deployed as a patrol aircraft and can be equipped with machine guns and missiles. It also played the role of a light fighter aircraft in counter-insurgency operations of African and Central American countries.