The British Typhoon Display Team will be presented for the fourth time at NATO Days in Ostrava & Czech Air Force Days. Thus, the United Kingdom becomes the 14th confirmed participant country of this edition.

Typhoon Display Team presented itself for the first time in 2009 and it was also its first public presentation in Central Europe. At that time, and also in 2016 as well as in 2018, Typhoon was one of the highlights of the dynamics displays of the show.  Eurofighter Typhoon is one of the favourites aircraft among the visitors, thanks to its famous engine sound. 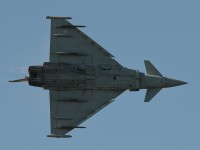 "The information that British Typhoon will be returning to NATO Days already appeared on the internet some time ago, but we are happy that we can officially confirm it now. British pilots always show the best of their skills with the aircraft and that is what visitors love to see," says Zbyněk Pavlačík, Chairman of Jagello 2000. "The Royal Air Force was the first foreign air force that attended NATO Days and it is an honour that they are always coming back. We are also pleased that the UK, as one of the traditional participant countries, is joining the celebrations of the 70th anniversary of the North Atlantic Alliance."

Just like the last year, pilot officer Jim Peterson will be the one in the cockpit of the EF Typhoon. Apart from being a display pilot Peterson is also a flight instructor in the RAF. In addition to that, he is also involved in the primary role of the RAF, which is maintaining the UK's airspace protection. Visitors can look forward to a flight display designed to demonstrate the extraordinary power, speed, and agility of the aircraft.

The Eurofighter Typhoon is a twin-engine multirole fighter with a characteristic delta wing shape and is currently the main fighter used by Royal Air Force. Although the Typhoon was originally designed as an air superiority fighter, the current version FGR4 can be deployed in various types of operations such as air policing or ground attack missions.