Czech Police will provide security and show its capabilities

NATO Days in Ostrava & Czech Air Force Days would not be possible without the involvement of the Police of the Czech Republic, one of the main organizers of the event and the second largest service taking part in securing a smooth course of the event. Still, its members will also show their capabilities in both dynamic and static displays.

Participation of Czech Police is essential for the event’s organisation; however, visitors rather appreciate its displays, which enrich the weekend programme and which will be performed both individually and in cooperation with other units. The first prepared demonstration is proof of it where the Task Force of the Moravian-Silesian Regional Headquarters together with their counterparts from the Usti Regional Headquarters will repeat the last year attractive release of hostages from a bus which had been captured by armed offenders. Support will also be provided by the Bell 412 police helicopter during the display. 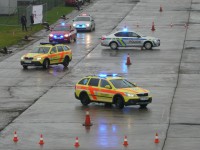 “Czech Police represents an integral part of NATO Days’ organisation. Besides the Czech Armed Forces, it is the largest service taking part in preparations and the event itself where it secures order in the venue or smooth traffic in the airport’s surroundings; and in addition, visitors may look forward to an extended presentation of its activities,” appreciates Zbyněk Pavlačík, chairman of Jagello 2000 and adds: “Dynamic displays of the Czech Police demonstrate capabilities across its whole structure as well as cooperation with colleagues from partner security services not only the Czech, but also the foreign ones.”

Such partner cooperation will be showed to visitors in another dynamic performance which will focus on demonstration of handling service vehicles in emergencies. During the display, Czech Police alongside with their colleagues from other security services will show the popular drifting. In the final display, officers from the police dog unit will show training of their service dogs in cooperation with their Slovak and German counterparts.

As part of the static exposition, visitors will have the opportunity to see police equipment and gear including the equipment of the special riot unit. Its members have prepared, for example, presentation of specially modified Schengesbus vehicle, quads, a thermo-visual vehicle or the Aluanutic motorboat.