PC-9 aircraft will show in both solo and group displays

Visitors of this year’s NATO Days in Ostrava & Czech Air Force Days can look forward to two dynamic displays of the PC-9M turboprop aircraft. Whereas in group aerobatics it will be presented by Croatian aerobatic team Wings of Storm, the solo display will be undertaken by a Slovenian aircraft. Slovenia thus represents the twentieth country which will present its equipment at the event.

Slovenian air force will participate in NATO Days once again after a year, however, whereas last year PC-9M Hudournik took part only in a dynamic display, visitors of this year’s event will also get a chance to look at the aircraft at the static display. But Slovenia is not the only country which will present these turboprop aircraft at Mošnov airport. 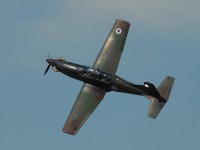 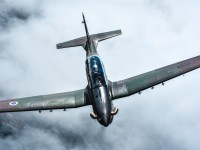 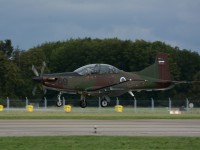 „We did not expect that Slovenia will show interest in attending NATO Days so close to the event, nonetheless, we are pleased that they did because visitors will thus have the unique opportunity to see PC-9M Hodournik in both solo and group display, the latter thanks to the Croatian aerobatic team Wings of Storm,” notes chairman of Jagello 2000 Zbyněk Pavlačík. „In addition, participation of the Slovenian air force increases diversity of the presented equipment and nicely complements with dynamic displays of the jets.”