Three foreign countries will again present their ground military equipment at the NATO Days in Ostrava & Czech Air Force Days. With already confirmed Romania and Germany, Poland and its AGAT Special Forces Group also join this list and will show its fleet and equipment on a static display.

AGAT is a popular participant at NATO Days, not only because of its Special Forces status but also the latest technology it presents at the event. For this year AGAT has prepared vehicles M-ATV Oshkosh, Humvee, Land Rover Defender or quad-bike Polaris. 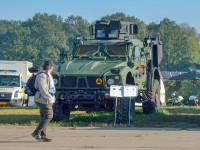 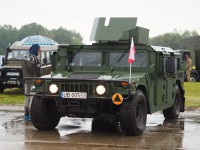 "For the third consecutive year, three foreign armies will be presenting their ground equipment at NATO Days, which is something extraordinary," says Zbyněk Pavlačík, chairman of Jagello 2000. "Moreover, the participation of the Special Forces in a public event is always rare, given the level of secrecy at which they usually work."

Special forces are considered within the Polish armed forces as a separate armed branch, which was established in 2007 and which falls directly under the Chief of General Staff. They were represented for the first time at NATO Days by COMMANDO in 2014 when Poland was a special partner nation. AGAT itself, whose main task is to carry out various actions behind the enemy line to disrupt its combat activities, premiered at the airport in Mošnov in 2017 and introduced itself last year.

However, this is not the final participation of the Polish Armed Forces at this year's NATO Days in Ostrava & Czech Air Force Days, further information will be published in the following week.