The Castle Guard will present its equipment and fleet

Traditionally, members of the Castle Guard will be visiting NATO Days in Ostrava & Czech Air Force Days. Visitors to the event can look forward to a dynamic demonstration of the escort vehicle with a state dignitary, but also a static presentation of current and historical technology.

Also this year, the motorcycle unit of the Castle Guard will perform at the Mošnov airport in a popular dynamic demonstration of the VIP escort. The presentation will consist of nine modern, specially modified BMW 1200 RT-P motorcycles, which will be accompanied by third-generation Škoda Superb and Land Rover Discovery. This technology, as well as previously used and historic motorcycles such as the BMW 69 S or BMW R 50, will be available to visitors at the static presentation of the Castle Guard. Besides, it will be accompanied by an exposition of equipment and armament of this separate component of the armed forces. 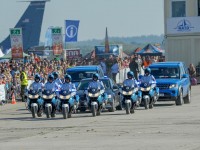 “Although the Castle Guard is often perceived by the public rather ceremonially, it is an important part of our armed forces and carries a very important function,” says Chairman of Jagello 2000 Zbyněk Pavlačík. "The Castle Guard is rarely present at such events, therefore we are pleased that we can present its performance, which is always highly anticipated by the public at every NATO Days."

The Castle Guard officially represents one of the branches of the Armed Forces of the Czech Republic, but it is specific in that it is organizationally directly under the Military Office of the President of the Republic and is therefore not part of the Army of the Czech Republic. In this elite unit of the size of the brigade operates 600 members who, in addition to the general requirements for admission to the armed forces must also meet some special, such as a certain height or the absence of beard and tattoo.