The spectacular security show NATO Days in Ostrava & Czech Air Force Days offers its visitors countless novelties and surprises every year. This year, too, the event will experience a big premiere: for the first time in history a purely Czech aircraft L 410 NG from the Aircraft Industries company will be presented here and will fly straight over the heads of several thousand people!

The L 410 series aircraft are turboprop, all-metal high-wing aircraft that excel in their reliability, safety and ability to operate in extreme climatic conditions. And this original "400" made the Czech Republic famous all over the world, as is evidenced by the numbers - over 1,200 of them have been produced so far. The first aircraft of the L 410 series was already constructed in 1969, in 2010 the development of a modernized version began as part of the MOSTA project, and the beginning of serial production dates to 2018. 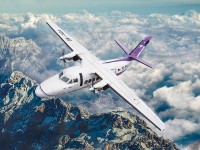 "Our aircraft has travelled all over the world, but spectators can see it for the first time at the NATO Days in Ostrava. We are very happy to be able to present the Czech aircraft on home ground," said Ilona Plšková, CEO of Aircraft Industries.

The upgraded aircraft offers improved flight parameters, operational characteristics and more modern technology and avionics. The new design of the wing with an integral fuel tank has a larger volume and therefore enables significantly longer range and endurance. Thanks to new technologies it can carry up to 500 kg more cargo. The luggage compartment has been doubled which is related to the extension of the nose part of the aircraft. By implementing these fundamental changes the operator will get an aircraft with improved parameters and useful features such as an increase in cruise speed and improved engine performance in warm and high-altitude conditions. The L 410 NG aircraft meets the requirements for economy of operation and, of course, also all safety criteria.