The Regional Military Command (RMC) Ostrava has prepared for visitors of this year’s NATO Days in Ostrava & Czech Air Force Days a broad presentation of its subordinate Active Reserve unit. It will show not only its equipment and gear, but also capabilities in two dynamic displays.

Members of the Active Reserve will follow up with their last year’s dynamic performance, which had been found a great success by visitors, and will be extended up to two displays. They will focus on the unit’s priority tasks regarding crisis management on the region’s territory such as protection and defence of critical infrastructure by an Active Reserve’s platoon and activities of a squad at a check-point. 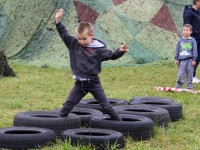 The static display will provide visitors with a shooting simulator, displays of both equipment and gear which, in addition, will be enriched by a presentation of a photo and video collection from the unit’s exercises. Children can also look forward to an attractive programme including obstacle course where they will try cramping, throwing a grenade or overcoming individual obstacles. The best of them will be awarded with promotional items.

In the case of those interested in the service in the Active Reserve or the Czech Armed Forces, there will be a chance to ask representatives of the Recruitment Centre Ostrava any questions regarding, for example, conditions of entry. The main aim of this centre, which falls under the Personnel Agency ACR and closely cooperates with the RMC Ostrava, is recruitment for the Armed Forces of the Czech Republic.

On the other hand, the main tasks of the RMC Ostrava are the state administration in accordance with a specific legislation. It simultaneously fulfils tasks regarding national defence as well as training of its subordinate Active Reserve unit. The unit participates in several exercises during the year, such as this year's “Winter Survival” or “Hradba 2018”.